So, in the third place but not least, we present you …:

Las Negras, the last coastal town dominated by the Castle of surveillance and beautiful beaches.

In the middle of its route, we will find a large cave only accessible by boat: the Cave of the Pirates, where you can see its high ceilings and know first hand the history of it …

We will pass through the San Ramón Castle, strategically located and one of the best preserved, until we reach a beach only for the kayak privileged: El Playazo, name that honors this area of ​​the Natural Park and where, as it could not be missed, We will make a stop to snorkel to discover before our senses the point where more marine life exists in the area, funds full of life. 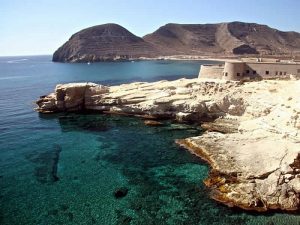 Cala San Pedro is probably the beach most famous for its beauty and for being a nudist cove, which even contains a spring and until a few years ago with a natural mud cave where you could have a “rejuvenating body treatment”.

Although somewhat crowded at present, still maintains its essence as Captain Q shows us during his visit.

Get to know this environment with our route in detail kayak Las Negras (Cabo de Gata), A spectacular kayak route in Cabo de Gata. Pirates, boarding!

Almería and kayak in Cabo de Gata, missing adjectives to describe this exciting and unique experience in the province, where from Xplora, Active Tourism and Multiadventure in Almeria we encourage you to try it if it is your first time or explore new locations as you will see in our offer of kayak in Cabo de Gata (Almería).

The good weather is here, so get ready for an intensive season of friends, kayaks and coves. And for you, what is the best kayak route in Cabo de Gata?